A Swansea IT expert is in the running for yet another top business award after stunning judges with his drive and innovation. 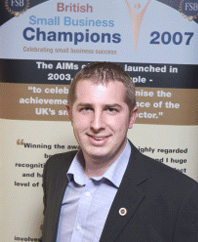 Judges at the British Small Business Champions 2007 said, “This young business should continue to grow offering competitive products in a difficult market” after meeting Andrew Downie and hearing him talk about his business, NetBop Technologies.

25 year old Andrew is a regional finalist in the Young Entrepreneur category. He founded NetBop Technologies five years ago offering web development and ecommerce. The company has flourished since then and it recently moved to bigger offices on the Swansea West Business Park, taking on two new staff.

“I’m ecstatic to get to this stage of the competition and keen to face the challenges of the next round of judging in London next month.”

Unlike most web developers Andrew has developed his own products including Bopspam, which blocks junk e-mails and BopControl, a simple way for businesses to update their websites. Andrew is also prepared to take on the big boys and win. Last year he won the right to market his junk email filter, using the word ‘spam, despite strong objections by the makers of the American meat product, SPAM.

Andrew is no stranger to award ceremonies, having collected a series of accolades over the years for his websites and products including Web User Magazine’s Gold Award twice. The company was named in Wales Hot 100 last year and Andrew himsef has been identified as one of the rising stars of Welsh business.